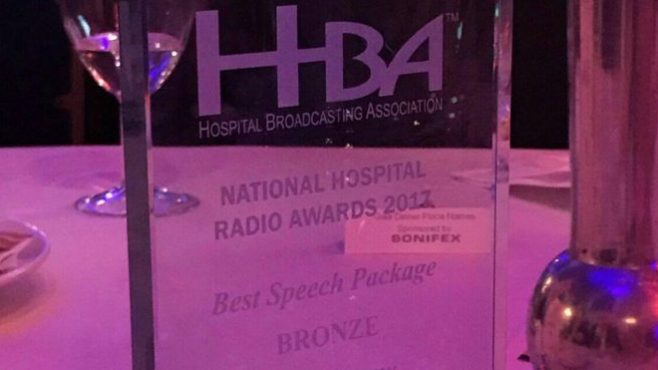 Radio Harrow is delighted to have won a Bronze Award at the Hospital Broadcasting Association Awards 2017. The Bronze Award in the Best Speech Package category was awarded to Radio Harrow’s ‘Living with Diabetes’ show.

The special ‘Living with Diabetes‘ show was presented by Pierre Petrou, James Byers and Matt Pulford in conversation with Lis Warren from Diabetes UK. The show involved the Type 1 diabetes sufferers speaking openly about what it is like to live with the condition and reflecting on the types of treatment available. ‘Living with Diabetes’ aired as part of Radio Harrow’s ‘Best Weekend Ever‘, a special event in October which showcased the best of the stations’ health & well-being focused community radio.

The ‘Living with Diabetes’ package received positive feedback from the Hospital Broadcasting Association judges, in a statement they said, “the judges agreed this was a very interesting package with a commendable structure and treatment.”

Radio Harrow is also proud to have been shortlisted for three awards at the Hospital Broadcasting Association Awards 2017. We received nominations for three categories: Best Station Promotion, Best Speech Package and Best Programme with Multiple Presenters.

Our other shortlisted entries included the promotion of the Radio Harrow Panto ‘The Tweeting Beauty’ and the ‘Saturday Patients’ Hour’. Each nomination showcases the variety of broadcasting that Radio Harrow offers.

The ‘Saturday Patients’ Hour‘ team submitted an entry for the Best Programme with Multiple Presenters. Each week they showcase songs and stories from the patients at Northwick Park Hospital alongside features which promote health and wellbeing such as the ‘Saturday Cookbook’.

In stark contrast our entry for Best Promotion included our 2015 Christmas Radio Panto called ‘Tweeting Beauty‘ which was a light hearted and witty reflection of the playful pantomime. Entirely written and produced by our volunteers, the pantomime provided light relief and entertainment for patients in hospital and the local community.

The station’s Programme Manager, Gary Walker said, “it was an honour just to be nominated for these awards, and to win a Bronze is great recognition for the station’s health & well-being focused output”.

Listen to all of our nominated entries on our Mixcloud below including the full HBA Award winning ‘Living with Diabetes’ show:

About the Hospital Broadcasting Association

Next
Skip Archimedes – The Miracle Man

Previous
A Tribute to Len Elman