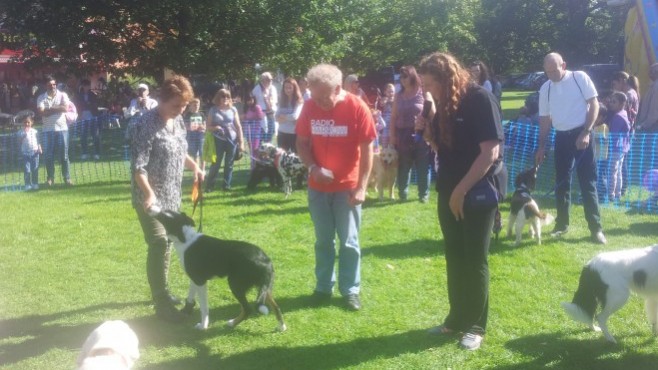 The Radio Harrow team were out in full force at the Pinner Village Show.

Volunteer Claire Knight led the charge for Radio Harrow joined by other members Brian, Malcolm, Vic, John, Durshant, Charles and Steve who were all introducing the variety of entertainers and keeping everyone informed throughout the day.

Longstanding member of the charity Charles Biggie even managed to become a stand-in judge for the annual dog show.

The Pinner Village Show is held annually in the Memorial Park, Chapel Lane, Pinner. The Show was started in the late 1980s by Pinner Round Table and has been run by the Rotary Club of Pinner since 2005.

It’s a family friendly event which boasts over 50 stalls with everything from refreshments and local vendors to charities and entertainers and attracts around 2,500 attendees.

The Show also provides an opportunity for local charities and organisations to promote themselves to the local community.

This year the event was opened by Nick Hurd (MP for Ruislip) and the line-up of entertainment included morris dancers, a dog show, the Harrow Concert Band and the Glen Trew Pipe Band.

Take a look at our pictures from the day.

Next
60 Days of Summer in Harrow