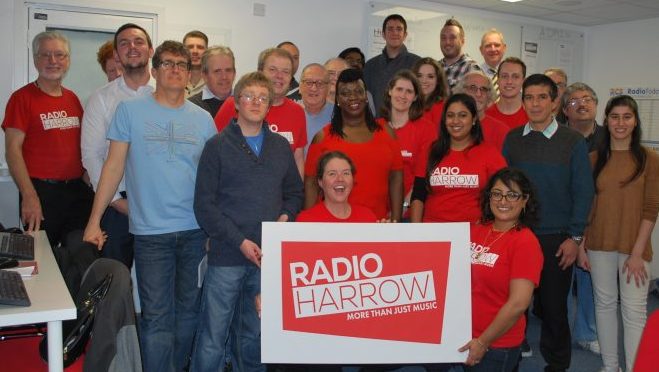 Wednesday 19th April 2017 marks an important milestone for Radio Harrow, as the organisation celebrates its second birthday. Formed in April 2015 following the merger of Harrow Community Radio, Ward Radio and Radio Northwick Park, Radio Harrow has been broadcasting to the wider Harrow community, as well as continuing to maintain a patient befriending service, based out of studios in Northwick Park Hospital in North West London.

Over the last year, the station has been involved in numerous high profile events in the community, broadcasting live from various venues around the London Borough, and being at the heart of events in the local area. In May 2016, the station was awarded recognition of it’s services to the people by the then Mayor of Harrow, Krishna Suresh, 13 months after the station started broadcasting under it’s current name.

In October 2016, the station ran a marathon broadcast fundraiser, titled ‘Best Weekend Ever‘, with specialist programming and local events organised to raise funds for the station. Events in the local area included a Treadmill Challenge at the Harrow Leisure Centre, and live music at Harrow Arts Centre and the Northwick Park Hospital Social Club – where we even debuted our very own band called ‘The Volunteers’. On air, the station broadcast from early Saturday morning through till Sunday evening with a mix of live programming, and documentaries. The ‘Living with Diabetes’ show, which aired as part of the weekend long broadcast was awarded a Bronze Award for ‘Best Speech Package Program’ at the 2017 Hospital Broadcasting Association Awards.

As well as that we’ve been working hard to engage the local community and have featured several interviews with local charities and organisations across our programming over the past year.

Some of the highlights from the past year include…

‘Living with Diabetes’ – Aired during the ‘Best Weekend Ever’ in October 2016, and was awarded a Bronze Award during the 2017 HBA Awards for ‘Best Speech Package’.

Next
A Tribute to Len Elman