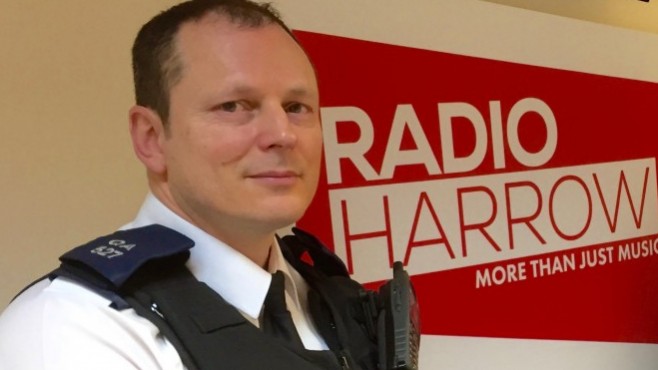 PC Daz Wiltshire of the Harrow Metropolitan Police Service joined the Radio Harrow Breakfast Show to raise awareness of how to avoid potential violent crimes and theft in the borough.

Theft against person is a common crime at this time of year. To prevent such crimes happening PC Daz Wiltshire offered lots of advice to keep safe. For those going out late at night, he advised to always try and stay with a friend so you are not alone on the way home. He described how to spot and avoid being followed.

PC Wiltshire described different methods of trying to protect yourself from pickpockets and how to keep your belongings secure about your person. Being discreet about possessions would help to prevent yourself becoming a target, he suggested that people shouldn’t display any money or jewellery openly. He also discussed the advantages of carrying personal alarms which help to alert people if you are in a position of danger.

As well as this, Breakfast Show host Gary Walker also spoke to PC Wiltshire about the proposed merger of police operations to combine the Harrow services with Barnet and Brent.

Next
Beauty and the Beast