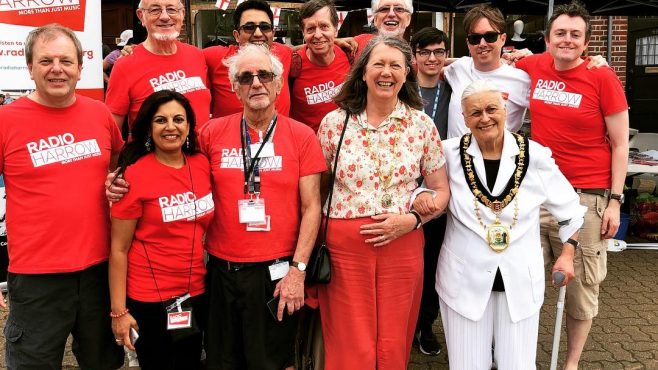 For the 4th consecutive year, Radio Harrow were present at the annual Wheelbarrow Race in Pinner. The day, which featured on 22nd April 2018, was held as part of the annual St. George’s Day celebrations. With the sun shining across North West London, the day featured campanologists, a great 50’s and 60’s performance from Simply Grey, and the infamous wheelbarrow race. Costume-clad wheelbarrow custodians raced each other down the High Street.

Scouts and Guides about to undertake their renewals of the vows. Listen in on https://t.co/MCXY2eQGL0 #StGeorgesDay2018 pic.twitter.com/bZ7kM6mL5J

Getting underway at midday, the first part of the day featured live music from Simply Gray, as well as the annual renewal of the vows for the local Scouts and Guides.

Ahead of the famous Wheelbarrow Race at 3pm, there was a parade of the competing teams, with all contestants and their wheelbarrows walking down the high street. The race itself was broadcast live on Radio Harrow, with various commentary teams situated across the race track.

Our @mcnab_ is standing by to bring you live commentary from the bottom of Pinner High Street. Listen live at https://t.co/MCXY2eQGL0 #StGeorgesDay2018 pic.twitter.com/3psz20SoZG

Radio Harrow’s David Reece was at the finish line keeping listeners and members of the spectating public informed as the competing teams completed the race. The winning team were Carbos, and the team with the best costume, were ‘The Things’, who received their awards from the Mayor of Harrow, and boxing superstar, Elliot Matthews respectively.

Your winners for the 2018 Wheelbarrow Race, it’s The Carbos! #carbos #StGeorgesDay2018

… and the prize for the best costume goes to The Things! Here they are being presented with their award by Elliott Matthews #StGeorgesDay2018

Radio Harrow’s Events Coordinator Brian Rose described the day as a real success. We’ve captured the highlights, including the speech from Harrow’s current Mayor Margaret Davine, in our video below:

You can listen back to our live commentary of the day on Radio Harrow’s Listen Again. We’ll be adding more photos to this page over the next few days!

Previous
Highlights from our Third Birthday