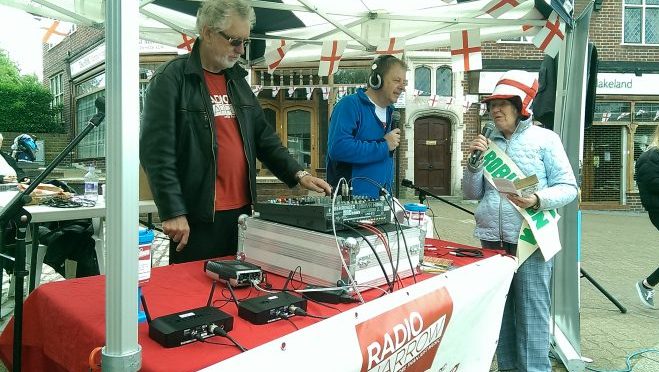 The annual St George’s Day festivities took place in Pinner High Street on Sunday 23rd April 2017. A flock of Radio Harrow volunteers were present at the event, providing music and public announcements for the community, with the entire day being broadcast live.

The event, which marked the first outside broadcast event for Radio Harrow when the station first launched in April 2015, featured numerous stands from various organisations, ranging from entertainment stalls to the St George’s Society. Local societies featured across the High Street, with many appearing on Radio Harrow during the day.

At 12:30, Brian Rose kicked off the day’s broadcast by interviewing The Rotary Club of Pinner who had organised the whole event.

Highlights from the day included folk-dancing, and the parade, as well as the annual ‘Ye Olde Wheelbarrow Race’. Singer Gemma Turner sung a cockney sing-along for the 12th year in a row, with an energetic crowd joining in with a number of familiar tunes, including Jerusalem, and the National Anthem.

At 2pm, the event featured the Wheelbarrow Parade, featuring contestants showcasing their wheelbarrows prior to the race, which began at 3pm. With contestants appearing in a number of unorthodox costumes, the race was won by ‘The Running Men’, with ‘The Aviators’ coming in second place.

Check out our gallery to view photos from the event!

Steve Pinchen on the airwaves

Steve Johnston with the Mayoress

Brian Rose chats with the Aviators following the Wheelbarrow Race

Great atmosphere before the start of the race

St George getting ready to slay the dragon