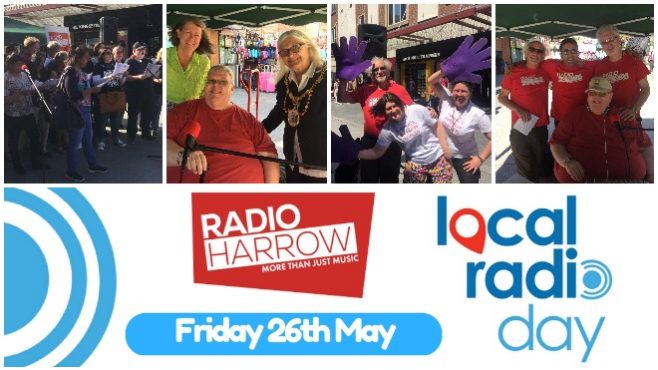 After participating in the inaugural event in 2016, on Friday 26th May Radio Harrow once again joined in the celebrations for Local Radio Day 2017. This year we took our participation in the national event one step further as we pitched up  an outdoor studio in the middle of Harrow Town Centre for a 12-hour extravaganza of live outside broadcasting. We kicked off the day’s special programming at 7am with the RH Breakfast Show running to Freedom Friday at 7pm.

The entire event was broadcast, not just on Radio Harrow, but also throughout the Town Centre, in the view of shoppers, and the working community of Harrow. During the day, the Radio Harrow team were joined by a variety of guests from the newly appointed Mayor of Harrow Cllr Margaret Davine, to community groups promoting health and wellbeing in the borough. With live music from local groups, a plethora of interviews, and even ample sunshine, we had a fantastic day celebrating Local Radio Day with the community.

The first guest of the day was Gaz Reynolds, a musician, and driving instructor, who’s been a long time friend of the station and RH Breakfast. With a new single out, Gaz spoke with Gary Walker and you can hear the interview here:

Local band, The Blinding Lights then played a live set in the Town Centre, much to the delight of shoppers, ahead of the long weekend.

After their performance, the band spoke with Radio Harrow’s Steve Johnston live on air about their influences, and plans for the future.

Ahead of a book signing at the Harrow Waterstones, David Perlmutter joined the team to talk about his book, ‘Wrong Place Wrong Time’.

Arriving with much loved bookmarks, and samples from the book, David spoke with Gary Walker.

While it may be off season in non-league football, it was very much Business as Usual when it came to talking sports, with Wealdstone FC General Manager, Nick du Gard joining the team with news from The Vale.

With news of a season ticket deal, and updates from the club, you can hear the chat below:

Ahead of the long weekend, Radio Harrow were joined by the Mayor and Mayoress of Harrow.

Speaking with Gary Walker, the Mayor, Margaret Davine, spoke about her plans for the borough.

The team were also joined by members of the Brahma Kumaris, who discussed meditation with Brian Rose.

You can listen to the discussion below:

Other highlights of the day included live music from Ruhi Rajani, and Joseph Doran, and live performances from the Find Your Voice Choir, as well as The Harrow Happiness Campaign, and an hour of 50s rock n’ roll. You can re-live this, and more in our collection of Tweets from the day, and our gallery of photos.

Friend of Radio Harrow, @ruhirajani is up next with more live music on #localradioday pic.twitter.com/hQ5trx5Ol7