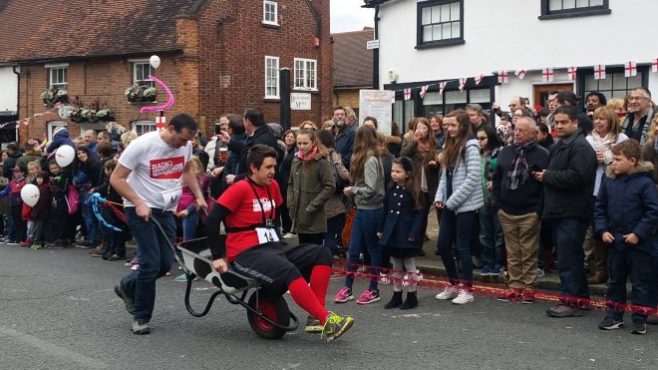 The race is a unique event in which teams of two take it turns to push their partner in a wheelbarrow, drink beer and race from Little Common to the High Street and into Church Green. Two of Radio Harrow’s volunteers, Jon Hart and Ant Sunney took part in the wheelbarrow race and came 8th out of 15.

Not content without a win, Jon and Ant also immersed themselves in the other activities throughout the day – and they came up with a win in the jousting. There was plenty for spectators to enjoy with entertainment from singer Gemma Turner, the Merrydowners Morris Men, the Herga Mummers and Punch and Judy. Plus there was a bouncy castle, a number of other stalls and a special addition this year, a petting farm.

A hugely fun day for the whole family, the celebrations also involved several local businesses on the High Street, with the Queens Head pub holding a hugely successful beer festival and the Friends Restaurant providing a hog roast.

Take a look back at all of our pictures from the day:

Jon and Ant at the pint stop

Do they know it’s a race? Jon and Ant chatting at the pint stop

Ant and Jon after the race

Gemma Turner sings up a storm

St. George makes an appearance at the celebrations

Next
Radio Harrow on the Community Channel