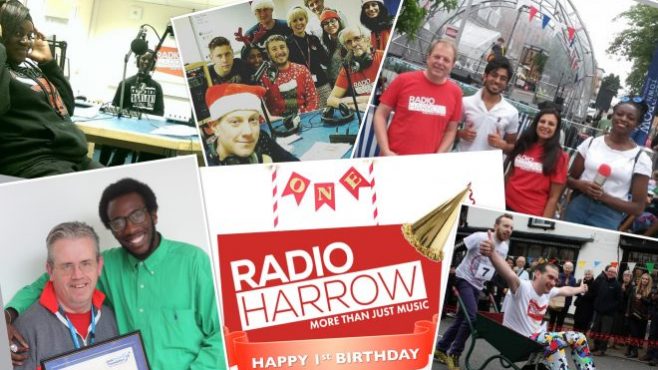 On Saturday 16th April, Radio Harrow celebrated its first anniversary as a community radio station. As part of the celebrations the charity, which officially formed on the 19th April 2015, also paid homage to its late co-founder, Keith Chilvers by renaming the main studio, ‘The Keith Chilvers Studio’.

The charity formed a year ago, when Radio Northwick Park and Harrow Community Radio merged together to form a new community radio station. The charity, which has more than 100 volunteers, serves to promote health and wellbeing in the Harrow community and continues to run a daily befriending service in Northwick Park Hospital. The past year has seen many highlights for the charity, including a summer of events across the Borough, a campaign supporting local charities across the 12 days of Christmas and two nominations at the 2016 Hospital Broadcasting Awards.

Keith Chilvers, one of the co-founders of Radio Harrow, lost his battle to bowel cancer in November 2015. Not only did Keith play a huge part in the creation of Radio Harrow, he was also a Trustee at Radio Northwick Park and helped to shape the formation of the main studio during its development. That studio now forms part of the Radio Harrow premises.

Trustee Claire Knight, introduced the renaming ceremony and spoke of Keith Chilvers’ influence at the charity, “it is without question, that none of us would be standing here at Radio Harrow today had it not been for Keith. He was a great inspiration to all of us and we hope by naming the studio after him, his story will continue to inspire current and future volunteers at the station.”

The emotional ceremony was attended by current members of the station, as well as alumni members of Radio Northwick Park and Harrow Community Radio.

Take a look at our pictures from the day:

The members of Radio Harrow

A montage of Radio Harrow’s highlights from its first year