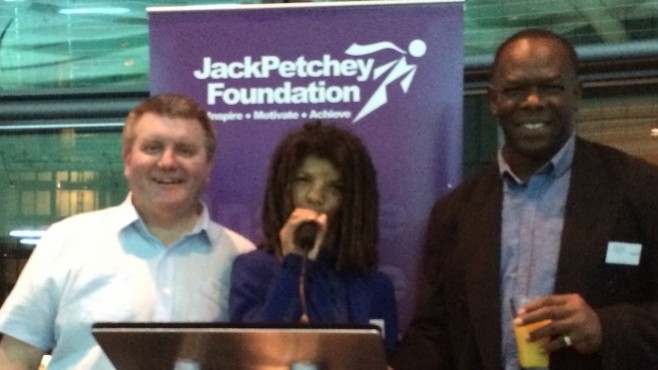 On the 2nd October 2015 Radio Harrow won a £1500 Crystal Award from the Jack Petchey Foundation.

Trustee Keith Chilvers represented the charity at the award ceremony. He describes the momentous evening where he picked up the award.

“To be invited to any awards ceremony is good but to be specially selected from an elite group of 150 is very special.

The Jack Petchey Foundation Bronze Awards Scheme is something that I introduced to Radio Northwick Park (RNP) 7 years ago when I was Treasurer at the charity and it’s something that I’m very proud that Radio Harrow has taken on since the charities merged. The scheme recognises the achievement of our young volunteers and has also helped us raise £6,000 since we started.

On the night we had to head “up West” (to be honest it was actually East) to City Hall, home of the Mayor of London. The event was held in the prestigious London Living Room at the top of City Hall.

We were greeted with a brilliant chamber orchestra in the room, handed a glass of champagne and given a warm welcome from reps from the Jack Petchey charity. We mingled for a while and then popped out on the balcony to admire the view – we could see the whole of EC1 from Tower Bridge to Canary Warf and back to the Shard.

As the awards began the CEO of the foundation was telling us why we had all been selected. We were in the room because out of all of the groups that run the scheme we had made it into the top 150 organisations. As well as being invited to the event we also received a cheque for £1,500.

The foundation gave away £225,000 on the evening to groups based in London and Essex. Since the scheme’s inception it has given away 100 million pounds to youth projects.

Once the formalities were done it was then out chance to meet others participating groups. We met a rock music group and a steel band from Harlow, a scout group from Essex and my great friend Kelly Oyebola who runs a basketball club in Barnet.

Myself, Kelly and his son Joshua couldn’t help jumping on the stage for an unofficial picture before it was time for the official “Harrow” group photo. Along with us there was the Brilliant Ignite Trust and Harrow St Mary’s Cricket club who we actually do commentary from in the summer sports show.

Up on the balcony we all line up, hold a sign up saying that Harrow groups have been awarded £4,500 and the picture is taken with a beautifully lit up tower Bridge in the background. It was a great night and an honour to be a part of.”

The founder, Jack Petchey left school aged 13 with no qualifications yet went on to become a multi-millionaire. His driving ambition has been to inspire and motivate young people and give them recognition for their achievements.

Jack Petchey CBE said “I am proud of all the programmes we’ve been involved in and every single young person who has participated. We aim to help young people believe that ‘If I think I can, I can’, so that whatever their background, they will achieve, they will make positive contributions to society, and they will be satisfied in their lives. I am so committed to this that aged 90 I still come to the office every day. It is why we have given £100m to realise this.

The Jack Petchey Crystal Awards recognise some of the amazing organisations like Radio Harrow that support young people and share our vision.”

Next
Laughter is the Best Medicine