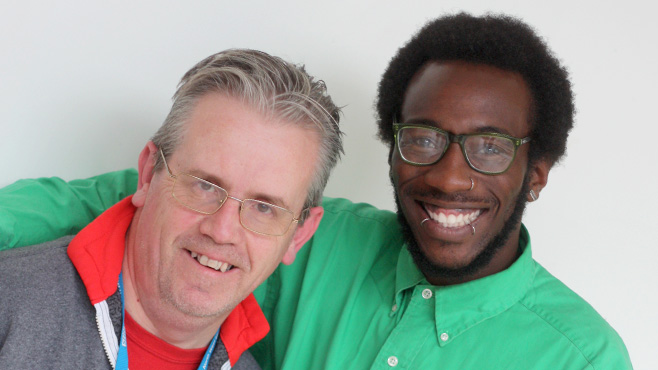 Volunteer Trevor Larter was awarded the Jack Petchey Leader Award for his hard work and dedication at Radio Harrow.

Linked to the Achievement Award Scheme, the Leader Award enables schools and youth organisations to honour the dedication and commitment of staff and volunteers – particularly those who go ‘the extra mile’ to support young people.

The Jack Petchey Foundation realises that lots of the great work, projects and schemes that young people are able to access and participate in, would simply not be possible without the support of their adult leaders. In recognising this the Foundation created the Leader Award – a chance for young people themselves to recognise their leaders, the ones that inspire and support them – and say thank you.

Miles Otway, Volunteers Liaison Manager sought to bring the award to Radio Harrow “I thought it was time that, seeing as we are a brand new organisation, we honour a member of our charity that has been giving their all without much recognition”.

The accolade is awarded to someone that is nominated by their peers. “I received an overwhelming number of nominations for Trevor Larter, the Friday Night Studio Manager” Miles said, “it was clear to see that he has helped to develop and support several younger volunteers, so this award was in honour of all his hard work”.

Trevor was praised as “a brilliant leader” that is “always providing the best support and guidance to the volunteers every week”. One volunteer described Trevor’s support from their first day, “as soon as I joined, I felt welcomed by him, his support has had a great impact on my development as a presenter and more generally has improved my confidence as a volunteer.”

Trevor was so shocked and “speechless” when he was announced as the winner, “I had no idea and I can’t believe that I’ve been chosen.”