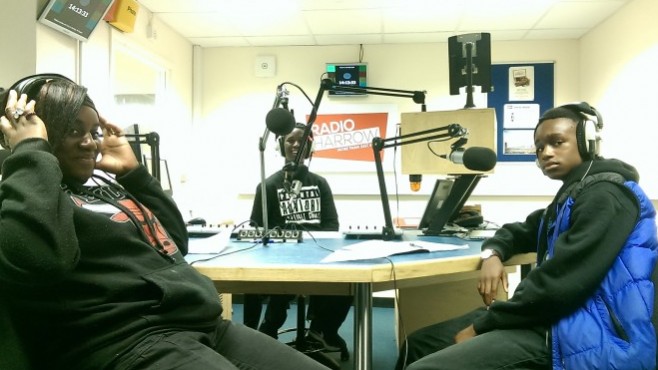 Jamaar, 15, Eva, 14, and Evans, 14, all spent the week learning how to produce a radio show with volunteer tutors at the station.

Keen to produce a show for the youth of Harrow, they crafted their playlist choosing their own music to fill their two hours of show.

Their live 2-hour programme was entirely produced, engineered and presented by the teenagers.

The Radio Harrow airwaves were treated to a mix of grime, hip-hop and rap, and the young people even showed off some of their dance moves in the studio.

There was much dispute over what was better – old skool hip-hop (which Eva preferred) or new rap and grime (Jamaar and Evans’ speciality).

This prompted a call-out for people to text in to show their support for their favourite genre. Eva’s old skool music proved the most popular for the listeners.

All three of the teenagers really valued their experience. Jamaar (aka Jamstar Jamaar) said “I loved my segment as I got to play my music – even though I couldn’t play all of it”. Jamaar learnt about audiences and censorship as he realised that “only clean versions of songs could be played on-air”.

Eva found the experience “amazing”. She said she gained confidence and communication skills, “I learnt how to talk everyone and include them into the show”.

Meanwhile Evans enjoyed learning “how to use the equipment and how to structure a live show”. For Evans taking part has changed his opinion on radio “I thought radio was boring, but I really liked this, I never thought radio would be so good”.

Take a look at all their pictures from the day:

Jamaar kicks off the show

Tutor Steve gets Jamaar all set-up

Dancing in the studio to Silento’s “Watch Me”

Doing the “whip” and the “nae-nae” around the studio

Evans takes to the desk

Tutors Keith and Steve watch the last segment of the show

Evans leads the discussion on games, sports and music.

This radio stuff is serious business…

…but radio is lots of fun too