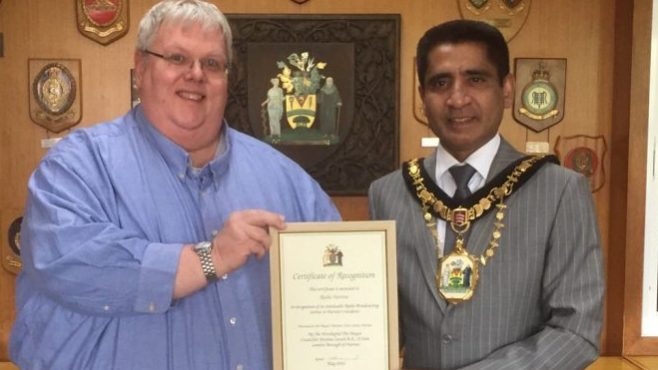 Upon receiving the certificate Gary Walker said he felt “honoured for Radio Harrow to be recognised for its commitment to providing a health and well-being service to the Borough”. He said “the certificate is also recognition for all the hard work and dedication of each of our volunteers who give so much of their time to the charity”.

Earlier in the week, the Mayor had joined Radio Harrow’s Breakfast Show to talk about his final week in power. He took the office of Mayor in May 2015 and turned over the reigns on Thursday 19th May 2016.

Krishna Suresh was elected as a Labour councillor in 2010 and has been serving the Rayners Lane ward of Harrow. Before he became Mayor he was Deputy Mayor and sat on the Licensing Committee.

He is also the ethnic minority officer for the Harrow West branch of the Labour Party. As an active member of the community he was a Community Champion and worked closely with the Safer Neighbourhood Team.

The outgoing Mayor praised the volunteer organisations in the borough and described his most enjoyable parts of being Mayor in the interview.

Next
Interview with singer Héllena